I shared a sneak peek (ok, maybe a little more than a sneak peek) of my back porch when I shared our news about moving. But today I’m going to share all the details. What we did and why. We chose a combination of stamped concrete and aged brick…

And I love it. 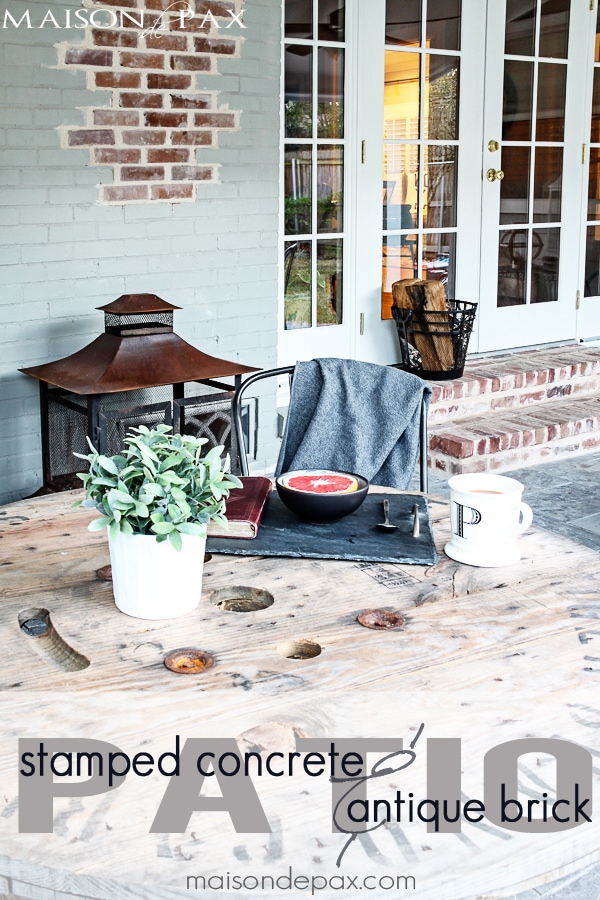 I had every intention of finishing the landscaping and paint and then giving you all a full tour with a new photo shoot… Here’s hoping I get that chance. Right now, though, our back porch is covered in kitchen-renovation materials… So in the meantime, you’ll get the almost finished version. 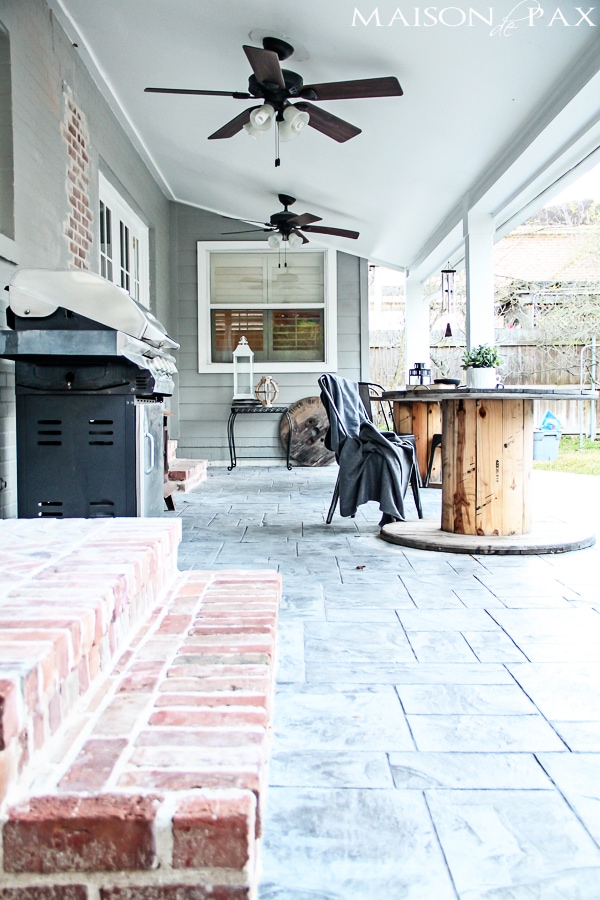 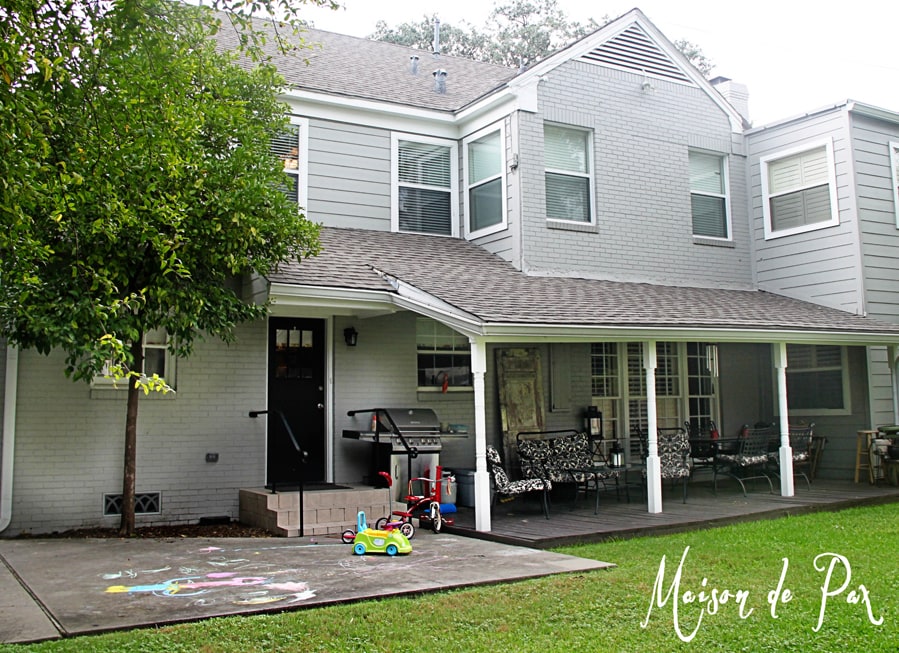 The dated columns would have made great table legs (still kicking myself for letting them get hauled off with the trash!!), but they were not great porch posts. In fact, one of them had rotted under the deck which was causing the porch roof to sink and separate from the main roof AND is what caused the giant leak in our kitchen. But I digress…

Point is, something had to be done.

To help with furnishing the long, skinny porch, we replaced the four posts with only three so that furniture could spread out beyond the posts more easily. 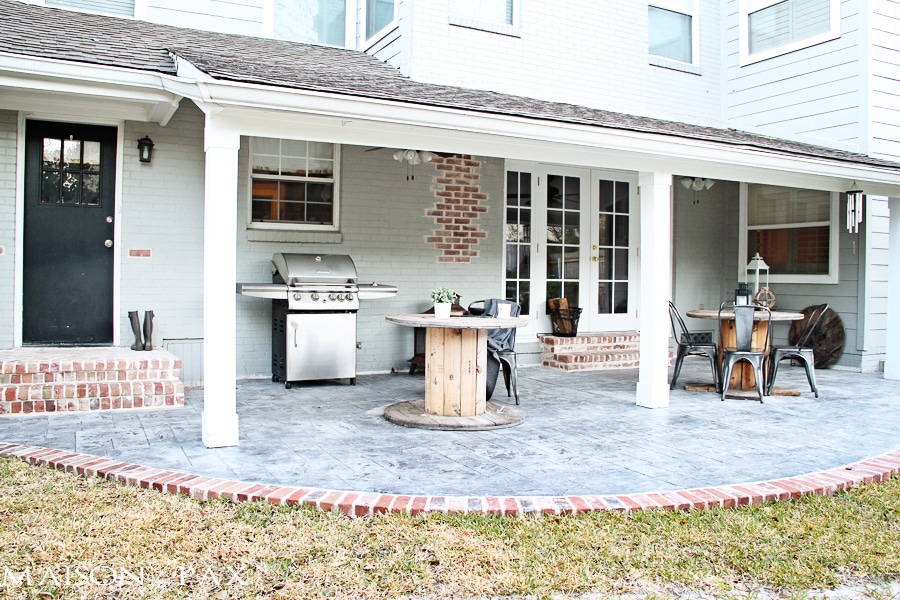 We created a more organic shape, including a new little sidewalk from the driveway to the back door (previously it had been a sea of concrete). 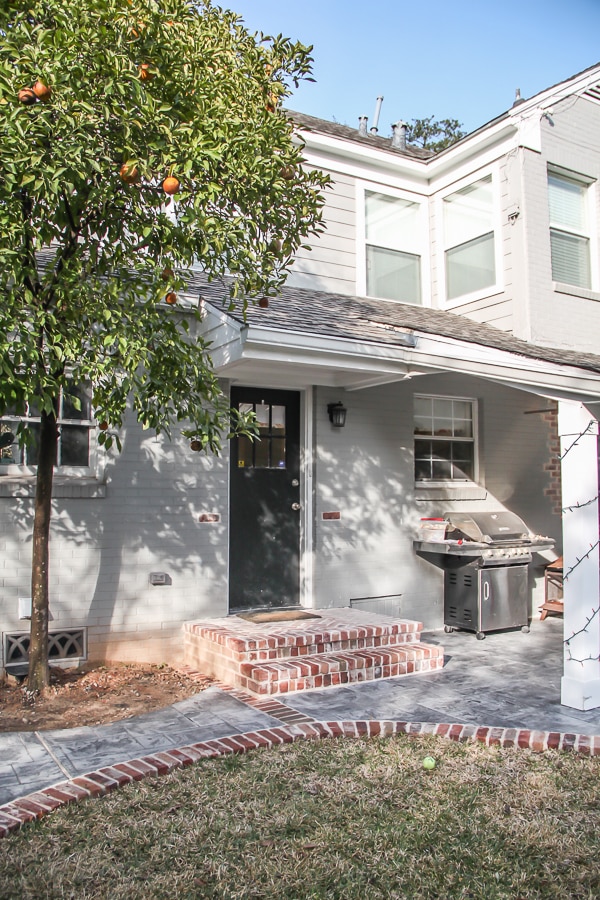 I debated forever on what materials to use… and finally decided on a concrete and brick patio. We used a blue/gray stamped concrete for the main portion of the porch and bordered it in an antique-looking brick. 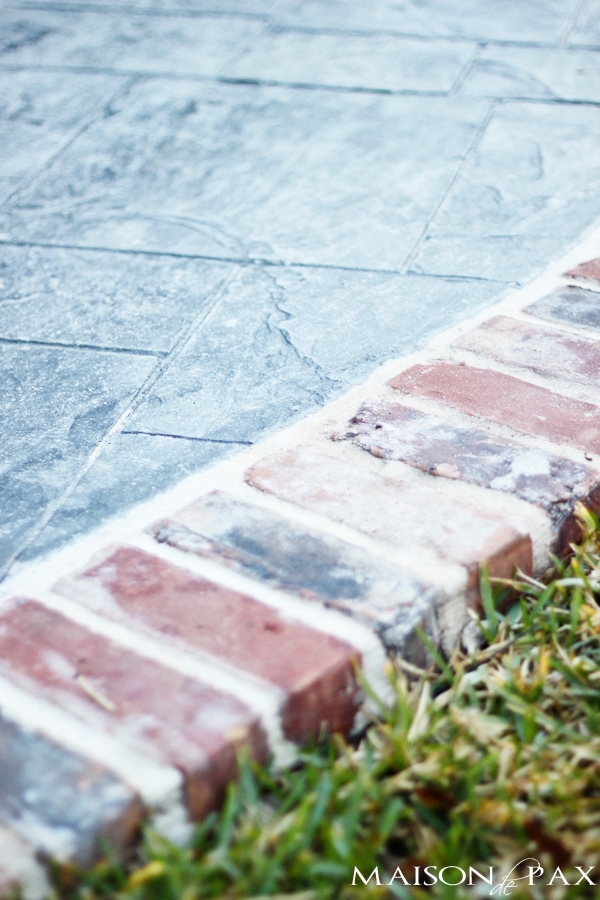 I just love the combination, especially against the crisp white trim and our industrial spool table and chairs. 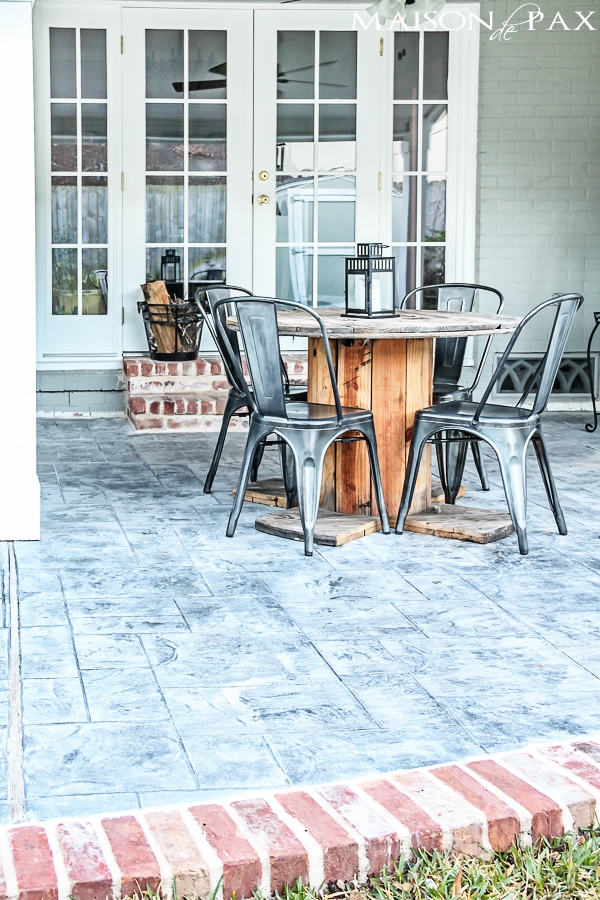 We also used the brick for the back steps (cue awesome music for my gorgeous herringbone – my favorite part!). 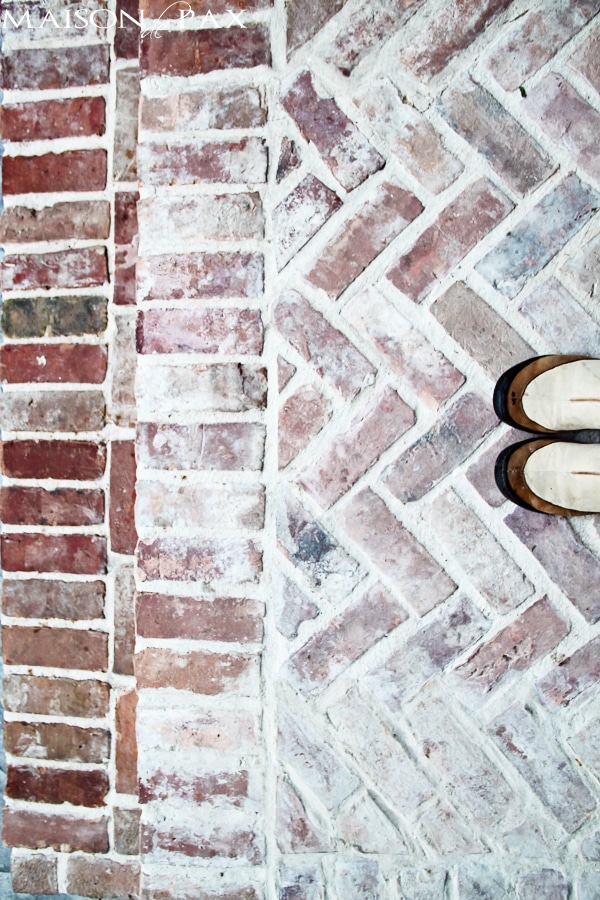 And, the most functional part of the renovation (other than fixing the roof, obviously) was to add doors from the dining room… 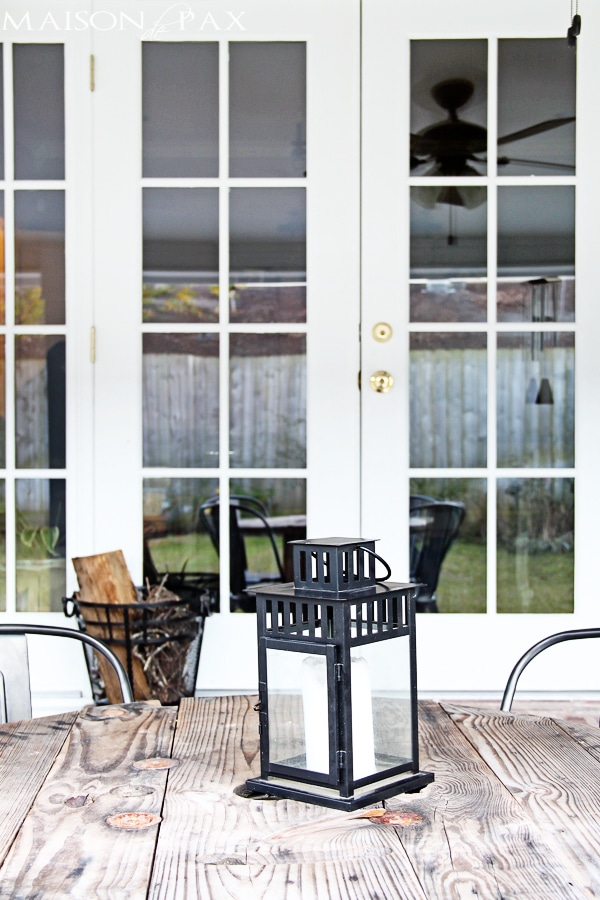 allowing for another set of brick steps. 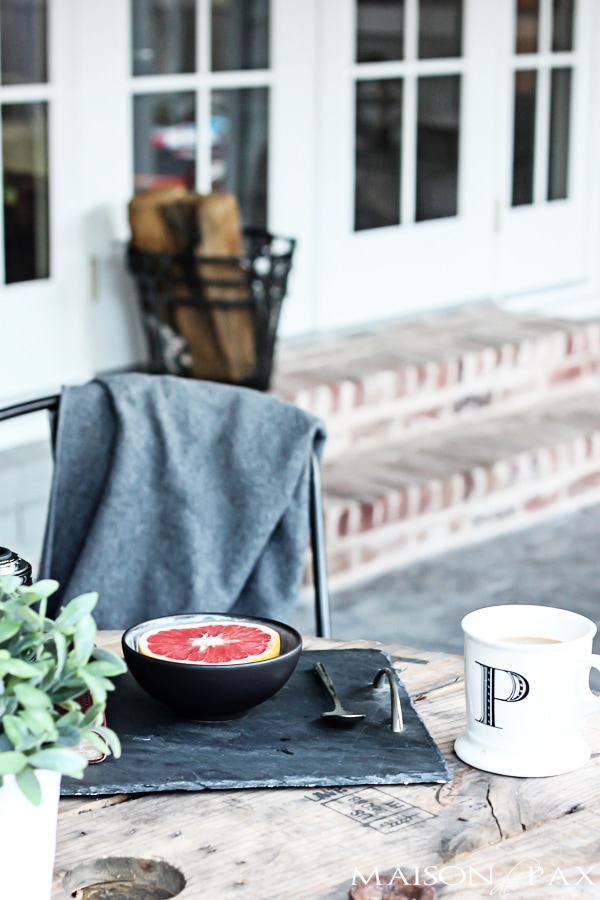 There were previously floor to ceiling windows there already, so we just replaced them with French doors. Ok, it wasn’t quite that simple (we had to have custom ones made and trim shifted and…. you get the picture), but at least we didn’t have to blast through the brick wall. 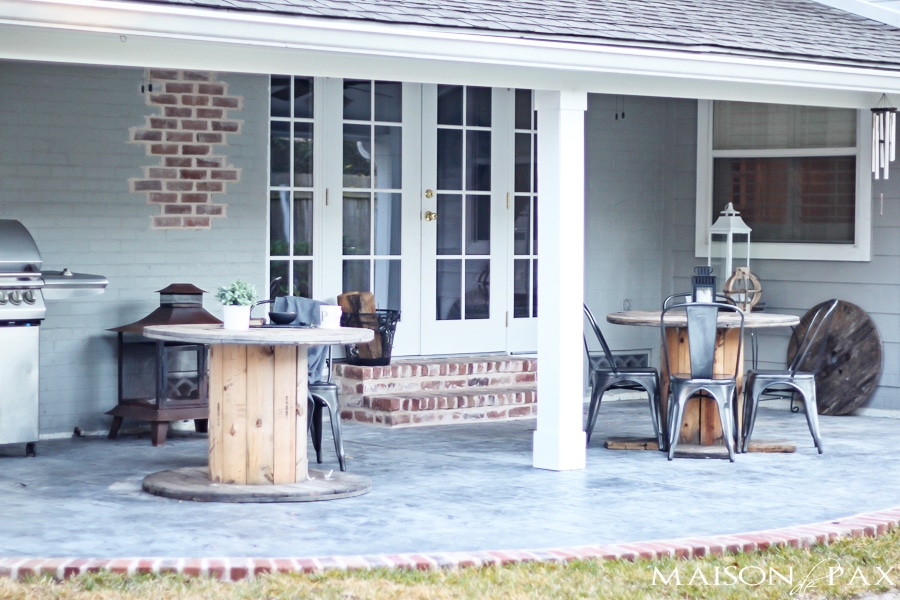 Since this is Texas, I can enjoy it when it’s not a million degrees or raining. 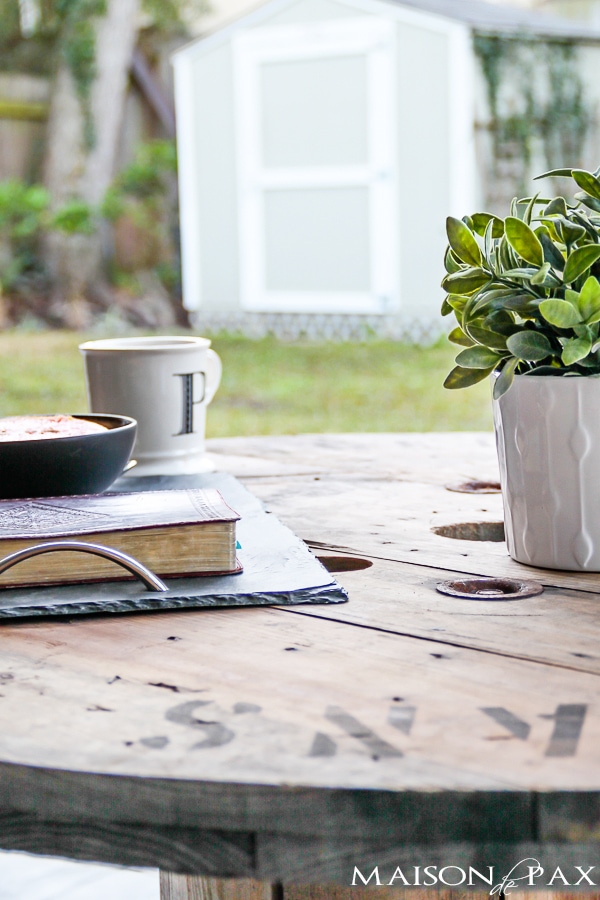 And I find it peaceful and lovely. 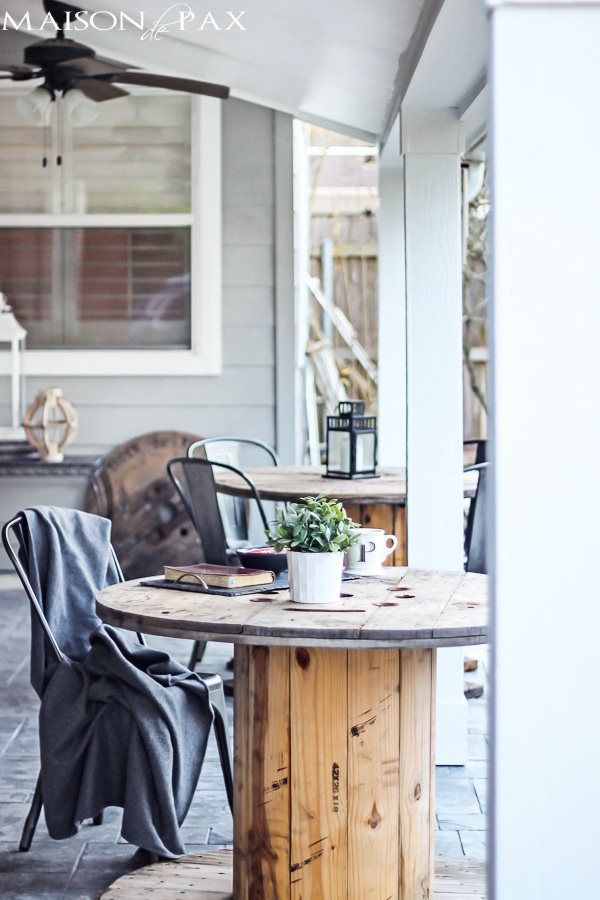 What do you think? Do you like the combination or do you find it too busy? 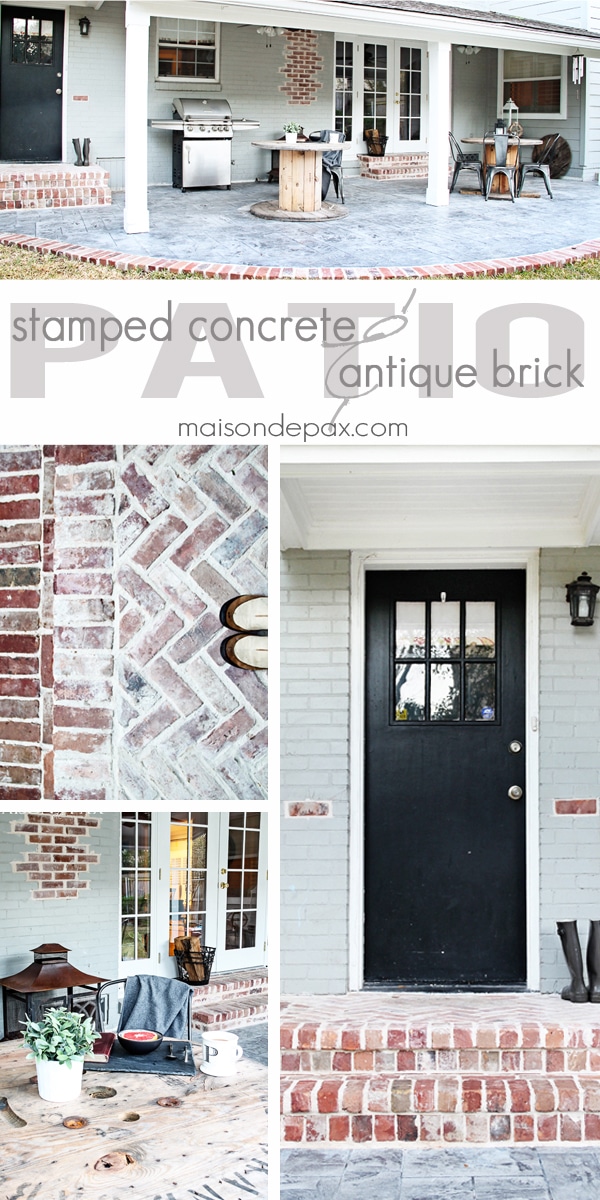 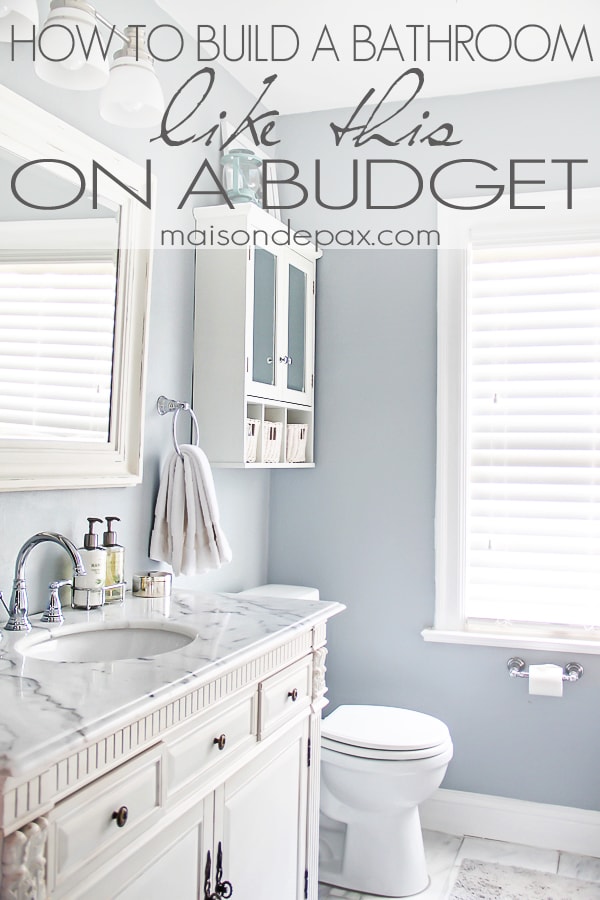 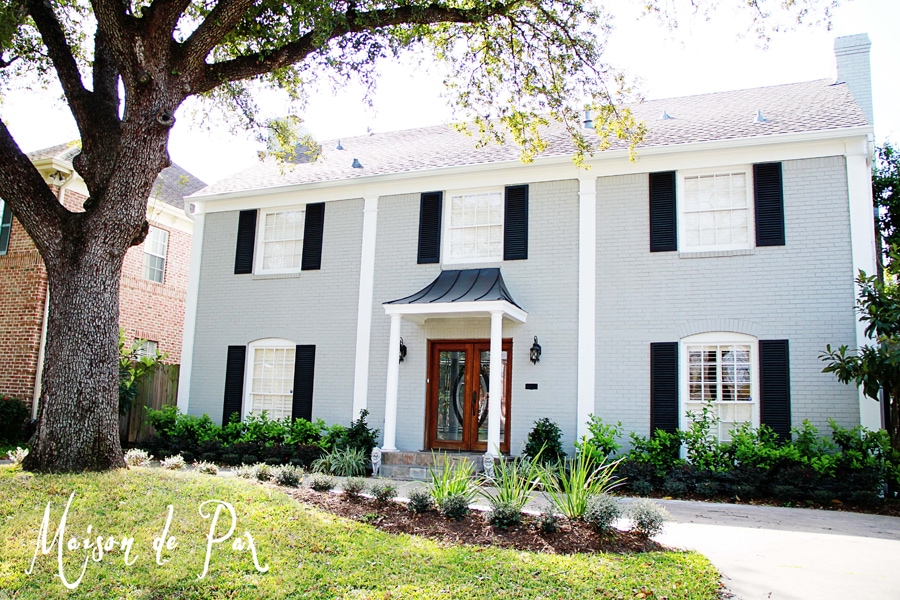 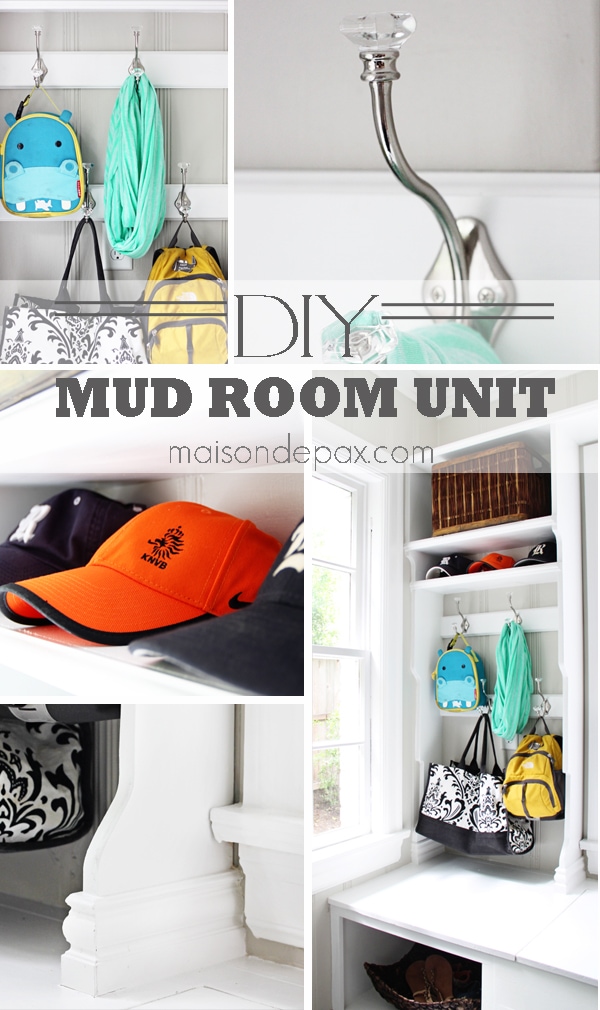 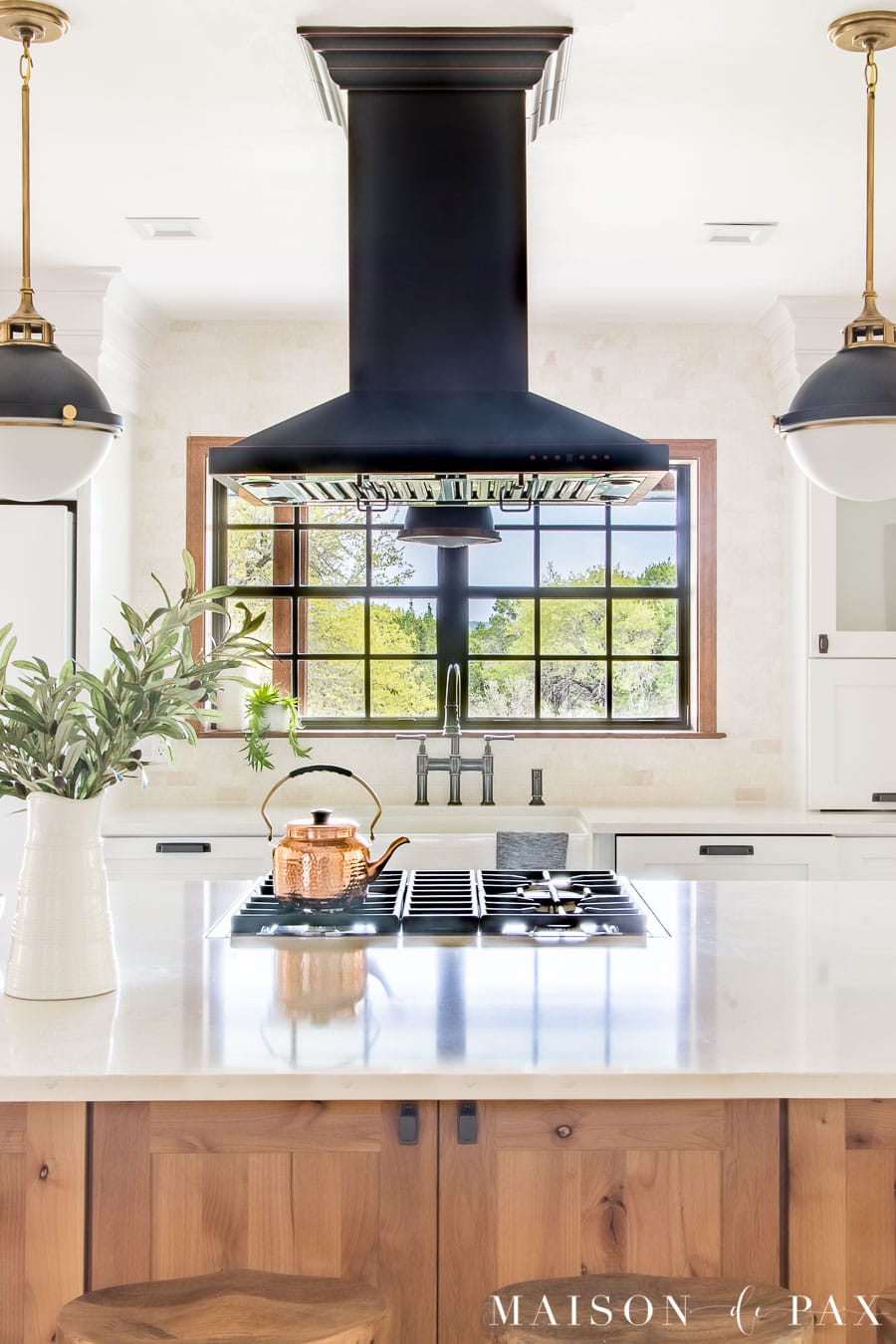 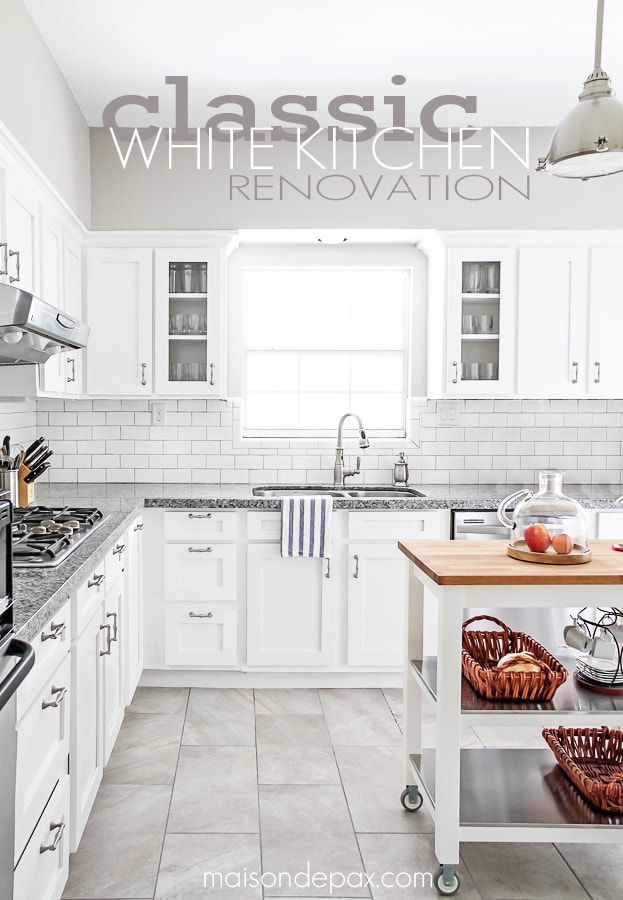 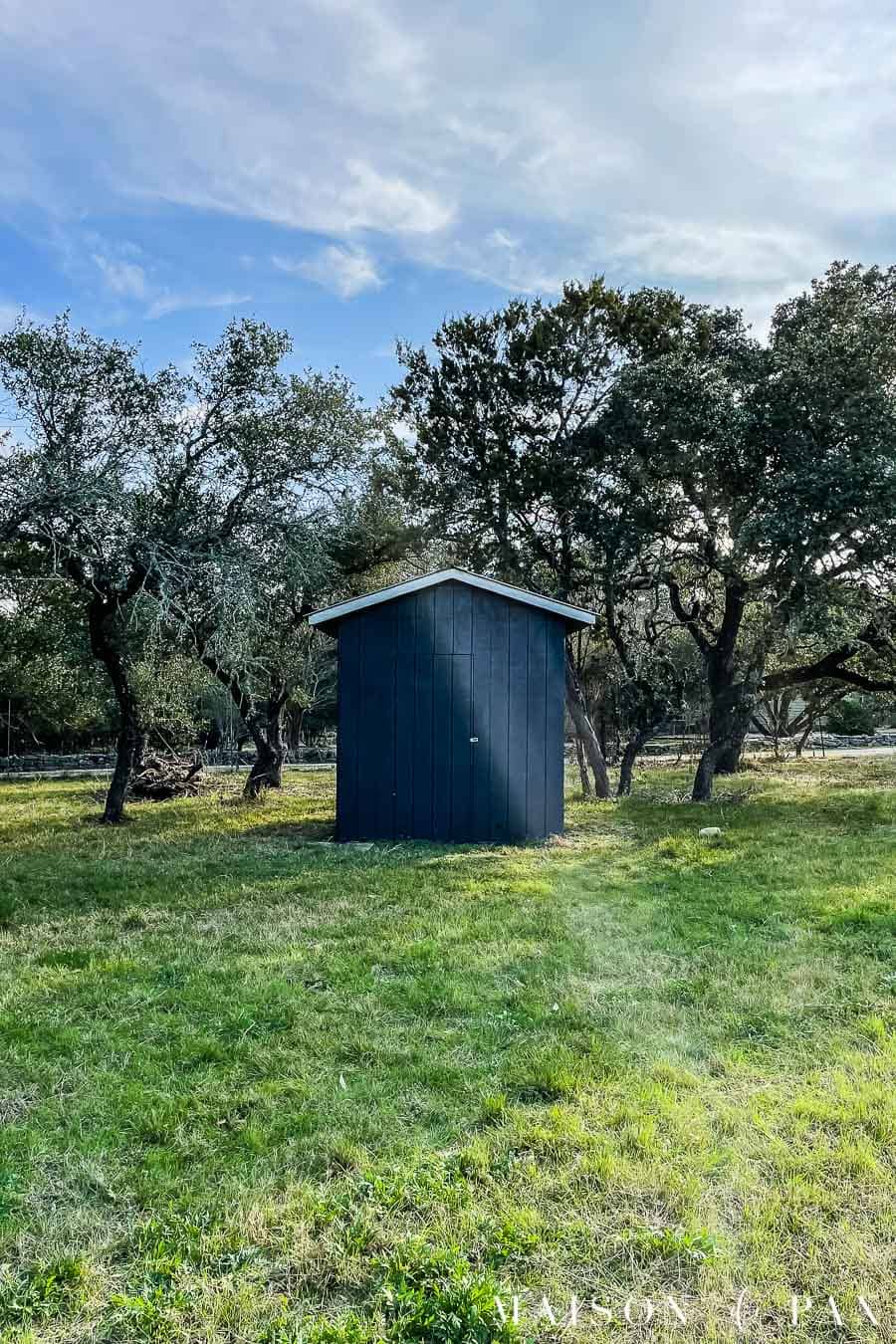 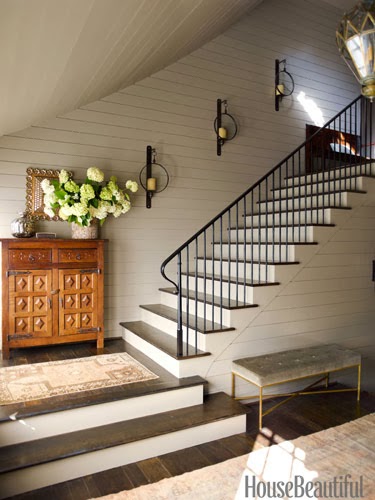 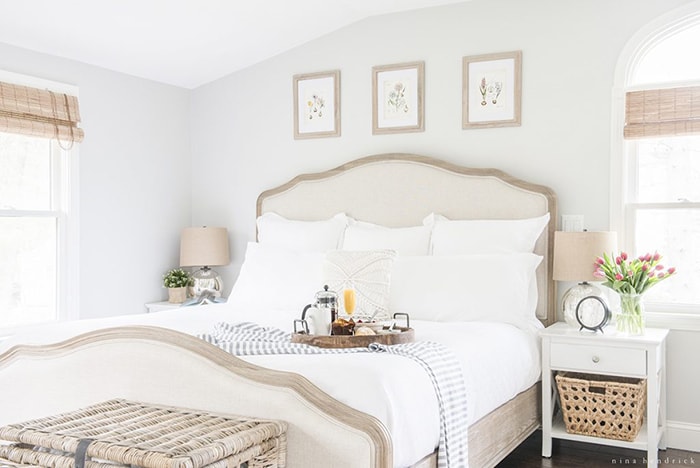 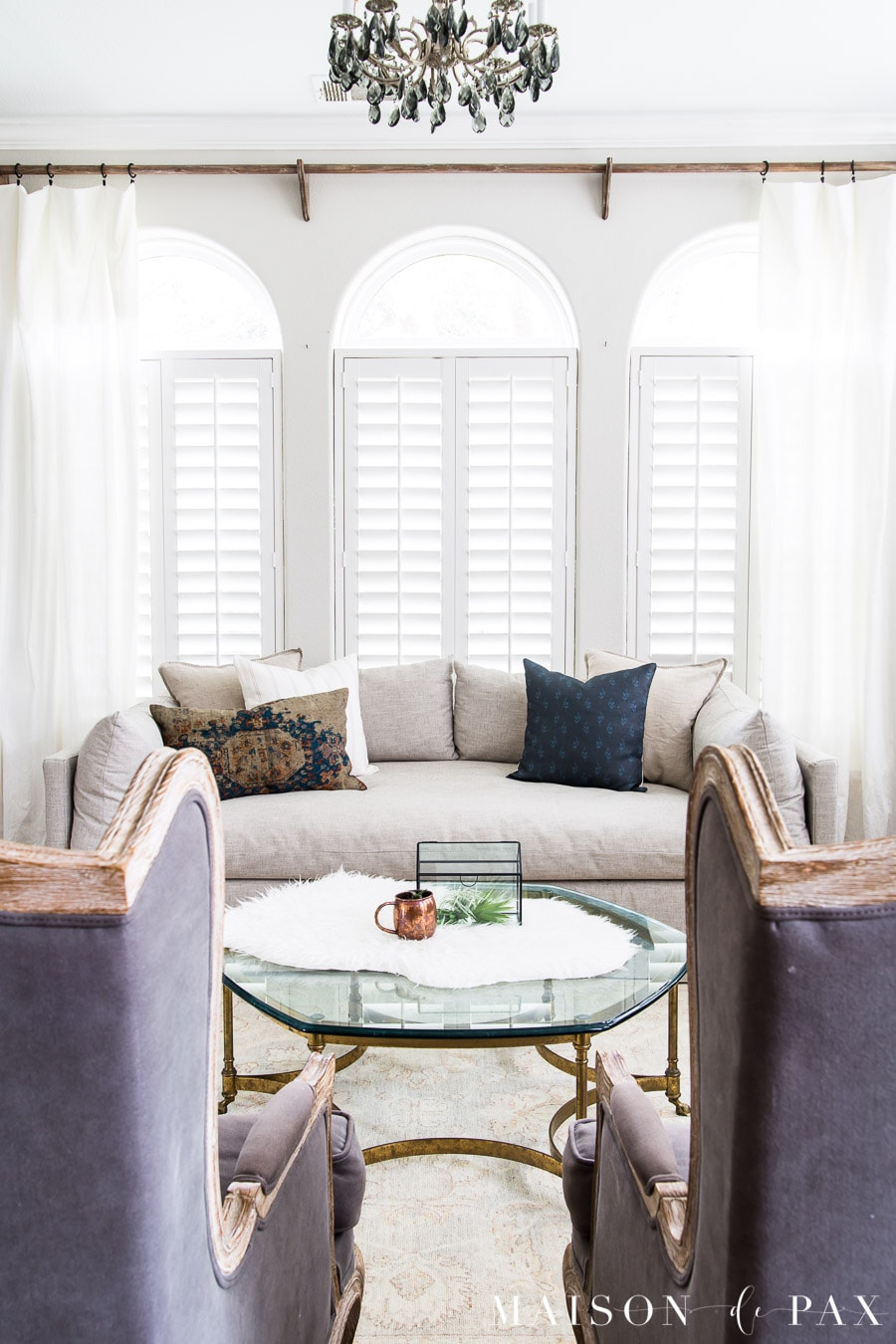