I recently decided that I needed some ruffled curtains… 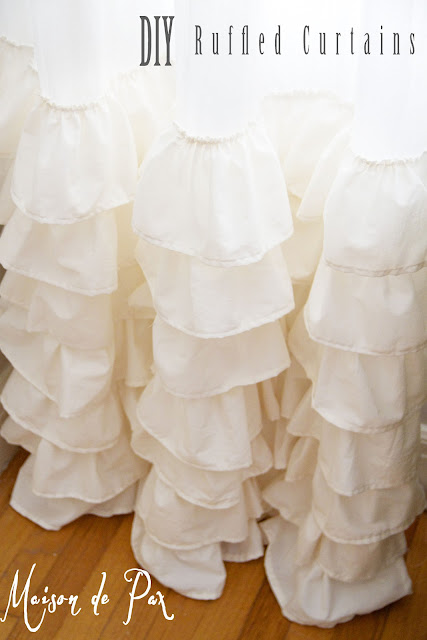 I must say that ruffles are VERY out of character for me (I have two boys, remember?), but I love them. I am NOT a very accomplished seamstress, so they were pretty slow and labor-intensive for me, but they weren’t hard. Good new is, if you can sew a straight line, you can make these! 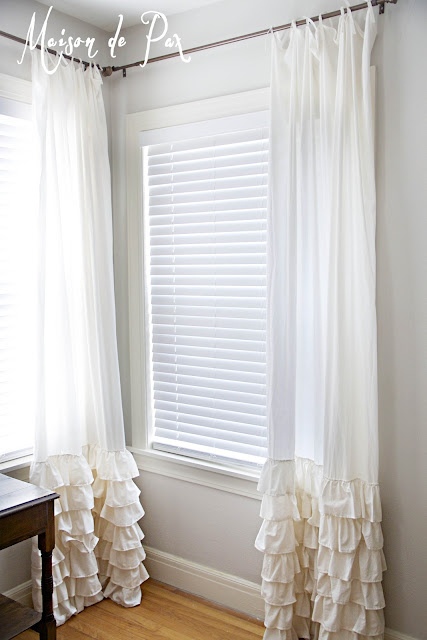 Unfortunately, I took very few process pictures, and they are all horribly dark because it was late at night, so I will spare you those. I will give you a few instructions, though. Since I’m going for a neutral, cottage-y look in my guest room, I used a 40% off coupon on plain ol’ unbleached muslin. Total cost for all the fabric for 3 panels (plus quite a bit of extra): less than $30. Yay.
I bought 96″ wide muslin so that the width would be the height of my curtains. Capiche? I bought about 8 yards, cut the width of my three panels (the room has three windows) accordingly, and used the 96″ length for the strips:

Then came the tedious part:
You now have three huge panels and a million strips. Change your sewing machine setting so that it makes a REALLY loose stitch. Do not double back at the start… just give yourself some extra thread. Run the loose stitch along the fourth side of each ruffle (the unfinished edge) about .5″ from the top.
I then laid my panels out on the floor and used a yardstick to make a very light pencil line where I wanted each ruffle to go. Be sure to make them close enough together to allow each ruffle to cover the unfinished part of the ruffle below. Then take your ruffle strips and hold your anchor thread (the one that doesn’t go through the material) and scrunch the ruffles until they are approximately the width of your panel. Pin them in place. Don’t forget to readjust your sewing machine so that it makes a tighter stitch. Sew each ruffle into place along your faint pencil line. The back should end up with simple parallel seams (one for each ruffle you added to the front): 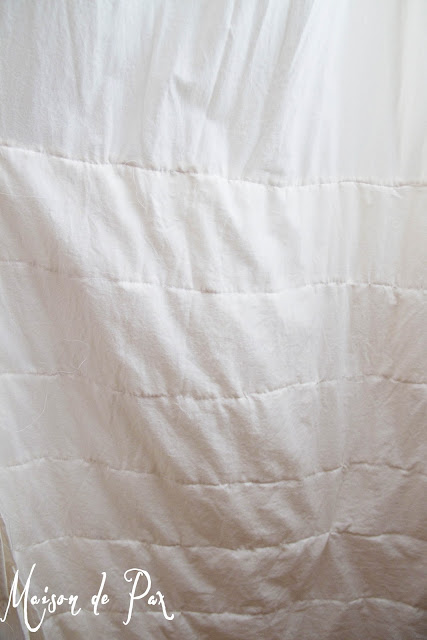 For the top ruffle, simply follow the same instructions, but make sure your raw edge is hidden (it should be if you ironed it earlier, per instructions) before sewing your loose seam. Attach it to the panel the same way, but be aware that it will be thicker than the rest (since you’ve folded over the scrunched side) and be extra careful to sew it on straight. 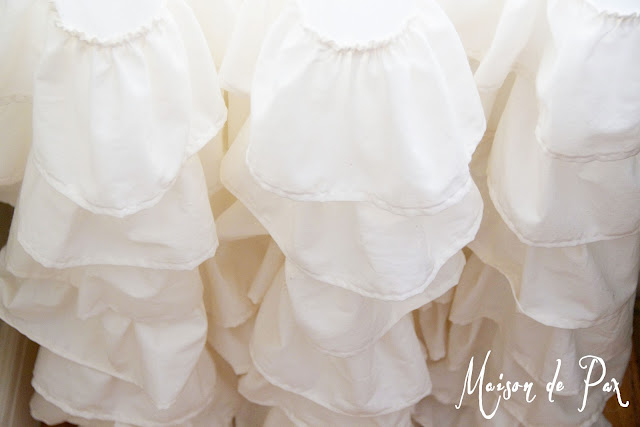 For the top, you can sew a pocket or use curtain clips, but I wanted something a little softer to go with my feminine ruffles, so I bought thin grosgrain ribbon (at 50% off) and cut it into 8″ strips. Fold them in half, and sew to top seam of panel with both ends sticking up. Then tie to curtain rod: 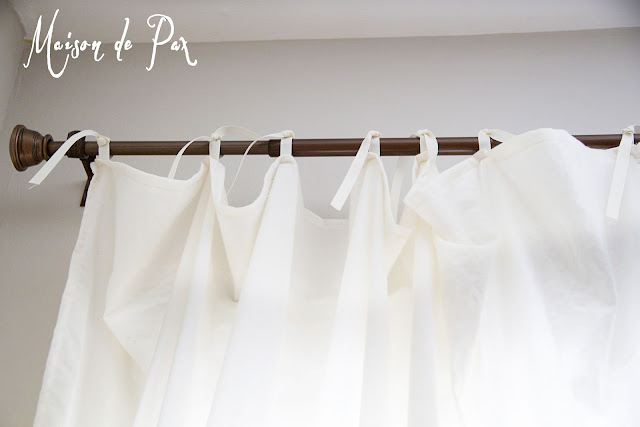 Like I said, this was a very feminine project for me… but I love them. They’re in my guest room, and I want that place to be a retreat. To be soft, inviting, homey, and I think these accomplished just that. Actually, I was surprised (and pleased!) to find that the curtains didn’t feel as girly as I feared they might. By using the neutral muslin, it softens the effect tremendously. I hope you are able to make some sense out of my nonsense tutorial! Feel free to ask any questions. 🙂 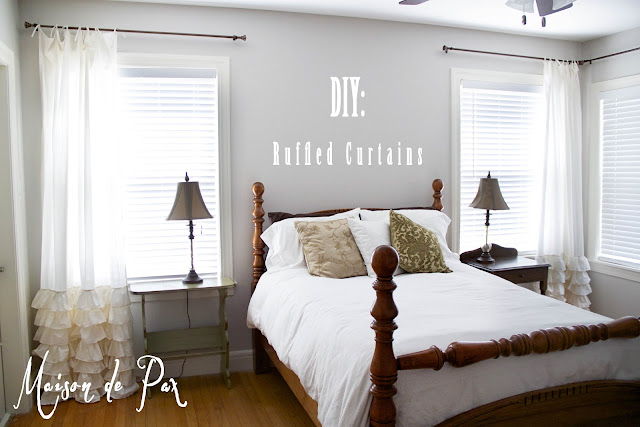 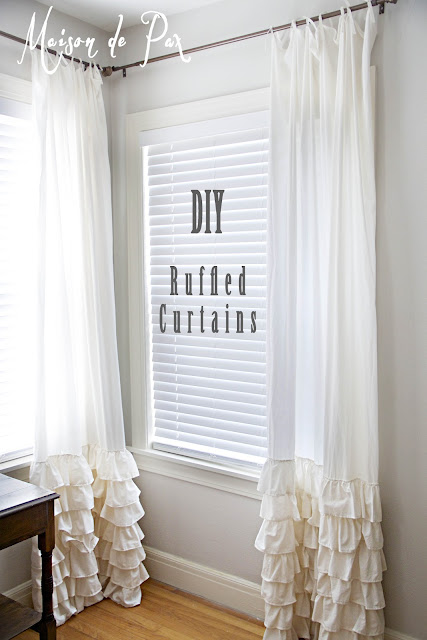 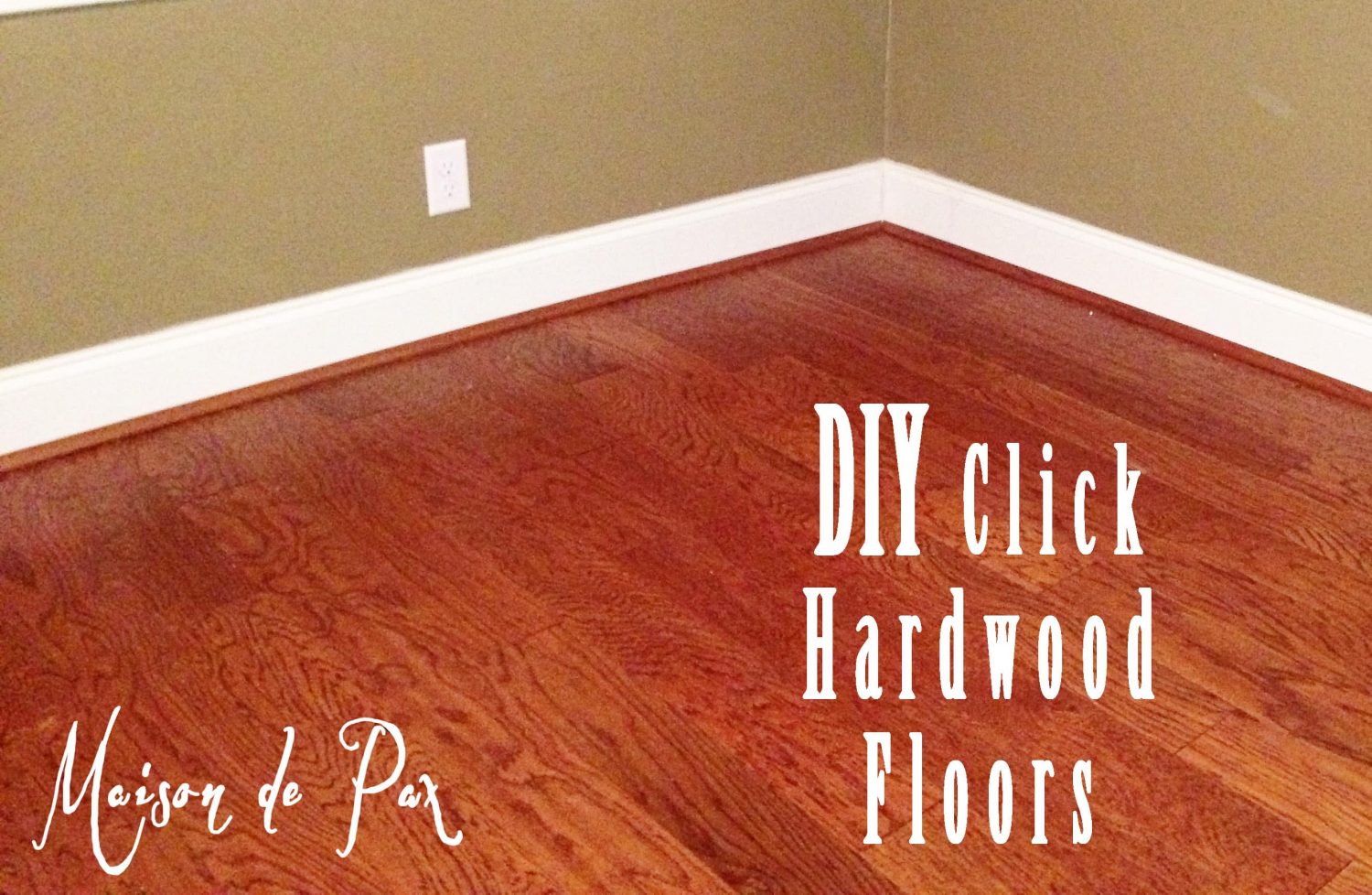 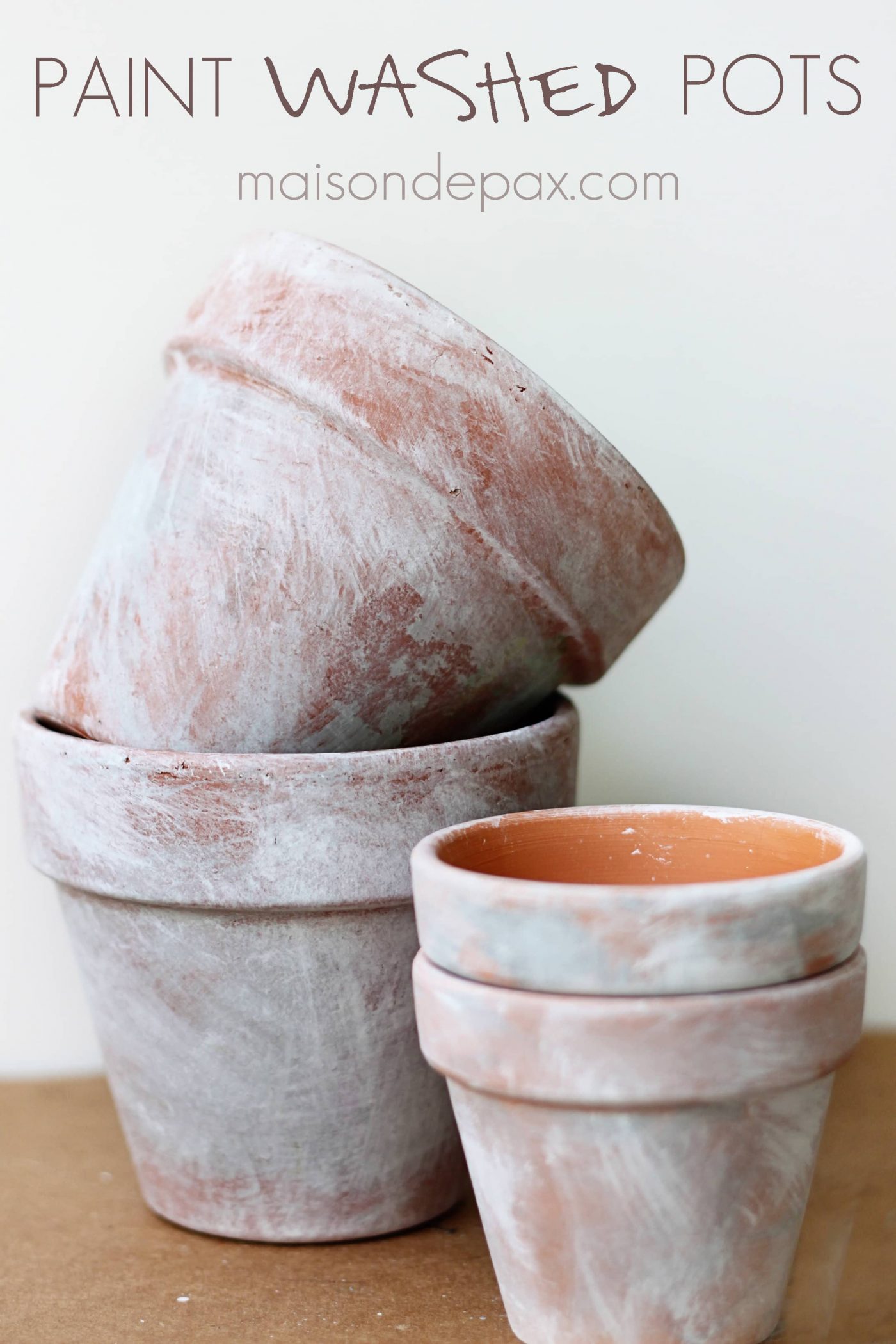 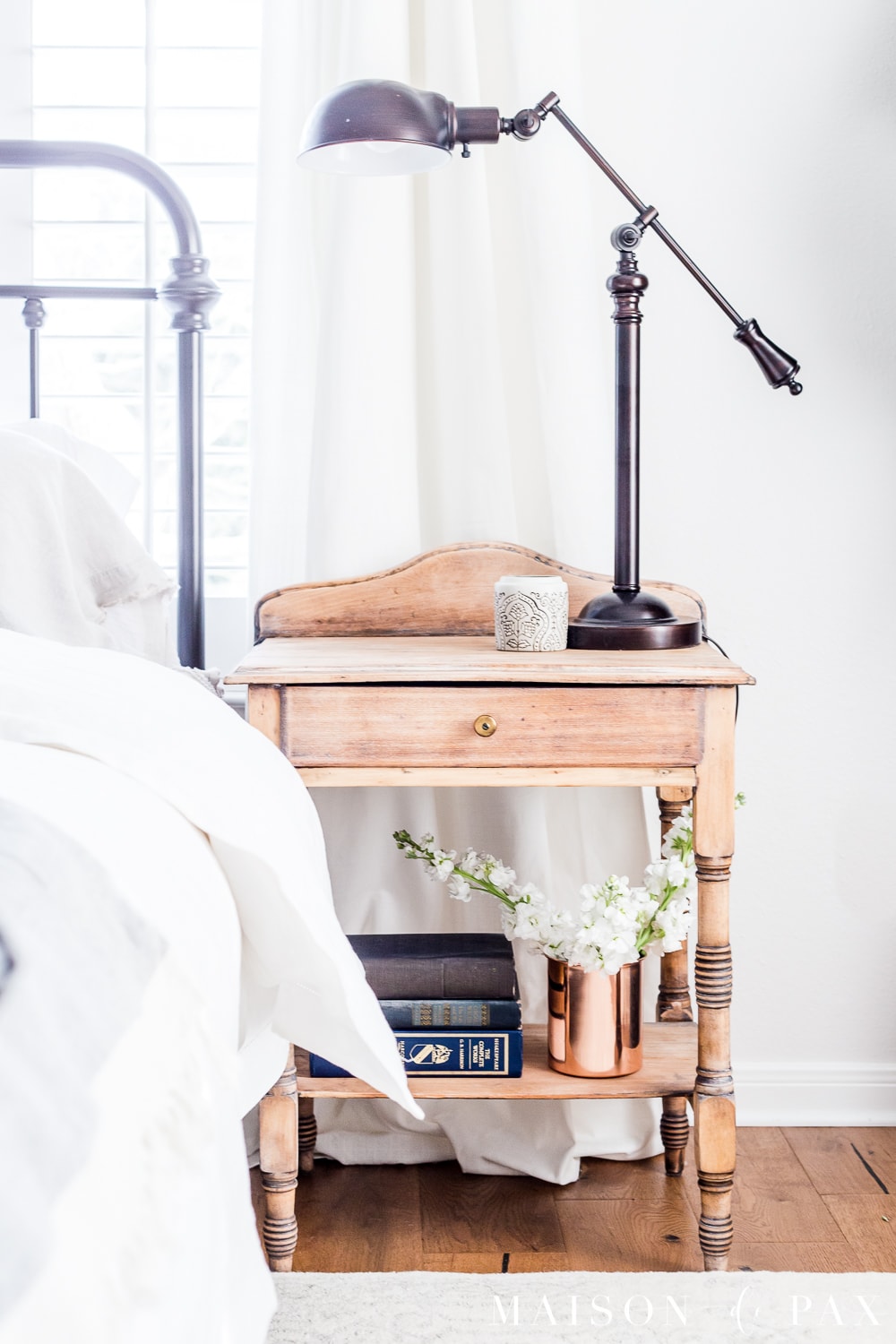 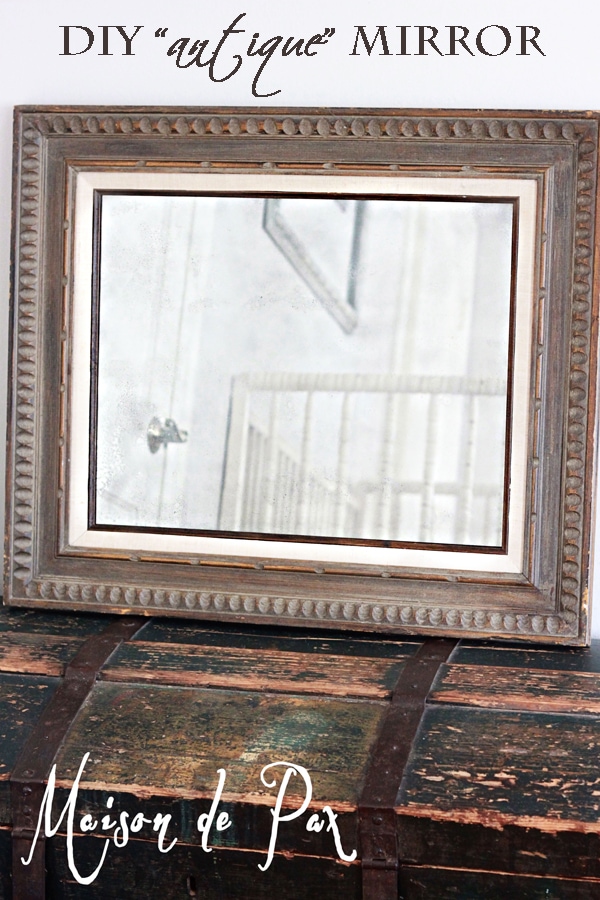 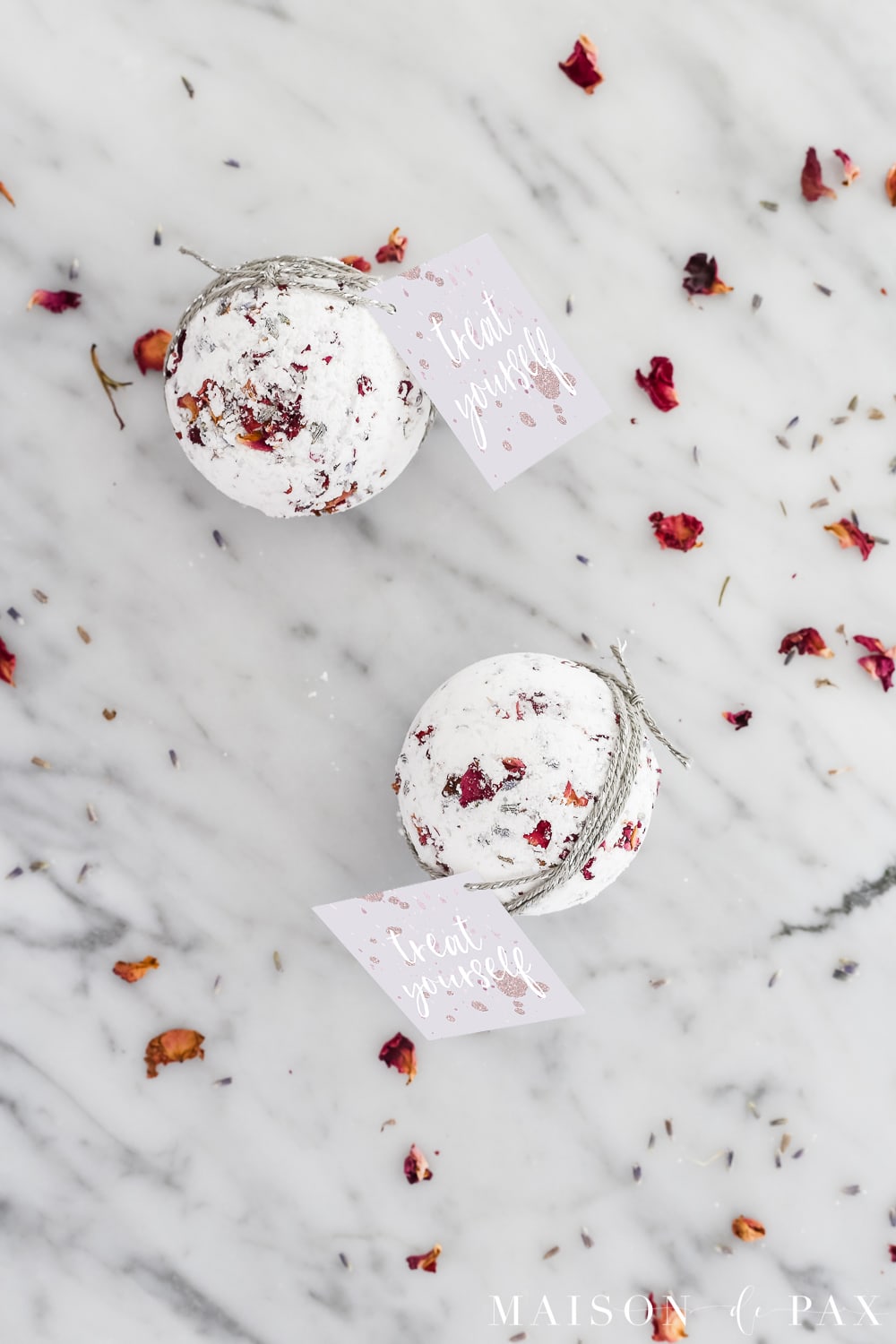